Local hero Kyle Croxall (CAN) won the ATSX 500 race at Le Massif de Charlevoix on Saturday by beating arch-rival Marco Dallago in a final decided by an incident in the very last portion of the track, according to the Austrian rider. The podium was completed by John 'Professor' Fisher (CAN), ahead of reigning World Champion Cameron Naasz (USA), who had to settle for fourth place. The Womens race was won by Amanda Trunzo (USA), the other reigning World Champion, ahead of three Canadian riders: Maxie Plante, Jacqueline Legere and Dominique Lefebvre.

As a result, the situation at the top of the ranking of the Red Bull Ice Cross World Championship is tighter than ever. The Men’s race now has two joint leaders on 2,550 points, Naasz (three wins this winter) and Croxall (two wins), ahead of the Dallago Brothers, Marco and Luca. The youngest of the Dallagos, who was leading the table before Yokohama, was eliminated prematurely in the Round of 16 and now trails Naasz and Croxall by 650 points with three races remaining in March.

“There is a difference between clean racing and foul play”, a gutted Marco Dallago reacted after the race.  “I took a pretty good start, I tried to stay behind Kyle and in the final portion I managed to overtake him before the last turn. But he grabbed my jersey and took me back I know what I felt and I know it was clearly not fair”, he added. This comes shortly after a very tense ATSX 1000 race in Yokohama last week, where Scott Croxall was disqualified in a semi-final after pushing and destabilizing Luca Dallago. 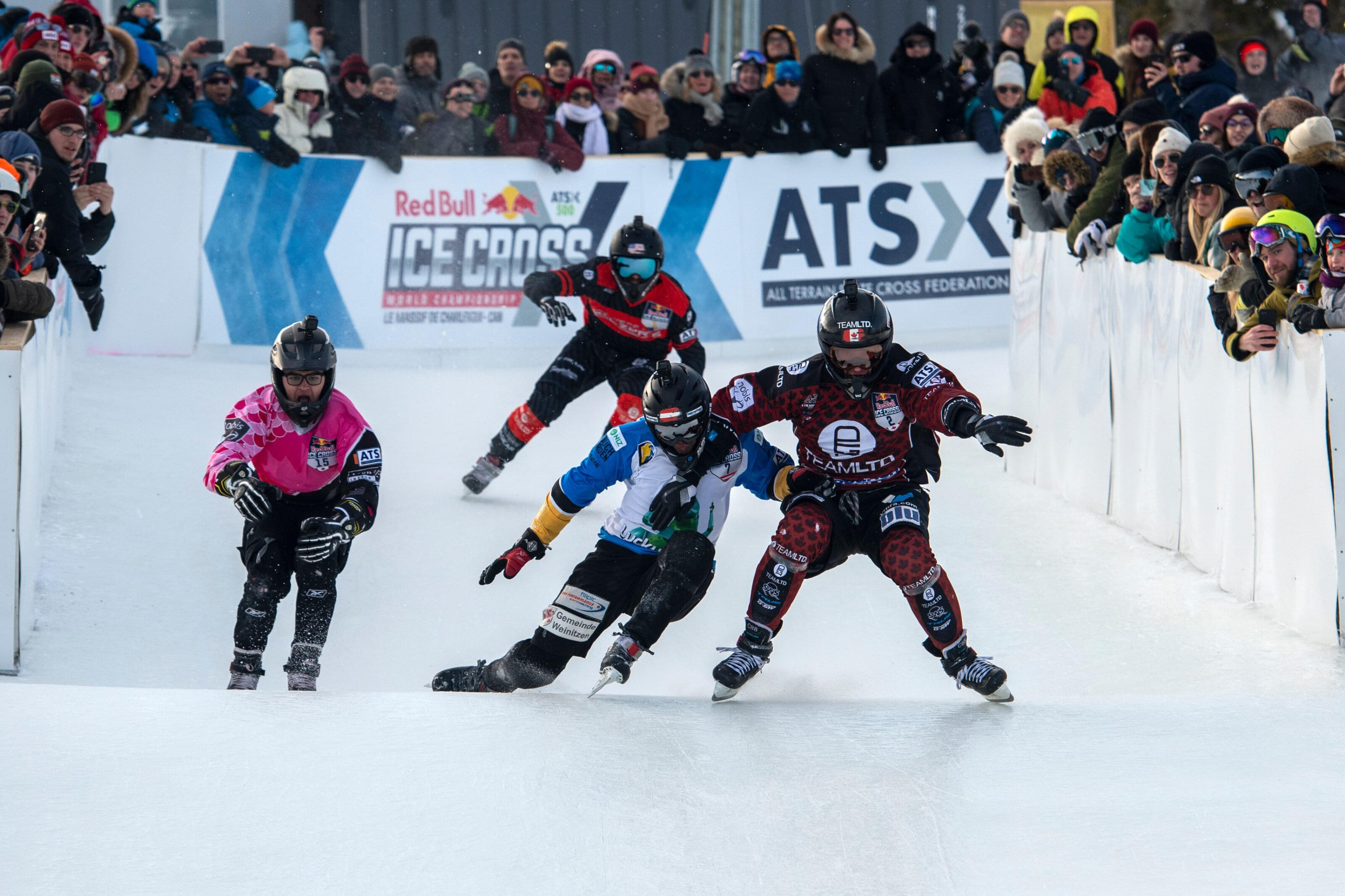 “If you want to call it a rivalry, do it. I don’t care. I felt good about this track, it was very fast, I knew it was against me at the bottom here and I messed up in the last race”, said Kyle Croxall after the 11th win of his career, the second this year after Mont-du-Lac (USA).

There was another Canadian rider on the podium, John Fisher, himself a veteran of the global Ice Cross circuit who had previously only achieved one podium result in a lower profile race. He managed all his heats perfectly and often passed rivals using the inside line in the last portion of the track. “It's only my second podium, they don’t come around very often so it’s very exciting to be here”, Fisher said after spraying champagne on the podium. “I just had to stay patient, not being afraid to be third, and pick-up my speed until the finish line”.

The Women’s final was another story, as Trunzo jumped in front and never looked back on a trio of Canadian riders. Plante, the winner last week in Yokohama, could not pass the American rider but managed to stay ahead of Legere who completed the podium. “I did not have a very good start”, Trunzo said, “but I didn’t know how close the others were, so I tried to keep my lines closed and to maintain my speed. I am looking forward to having a break, to put my body back into one piece, and then take it all the way to the end of the season”. 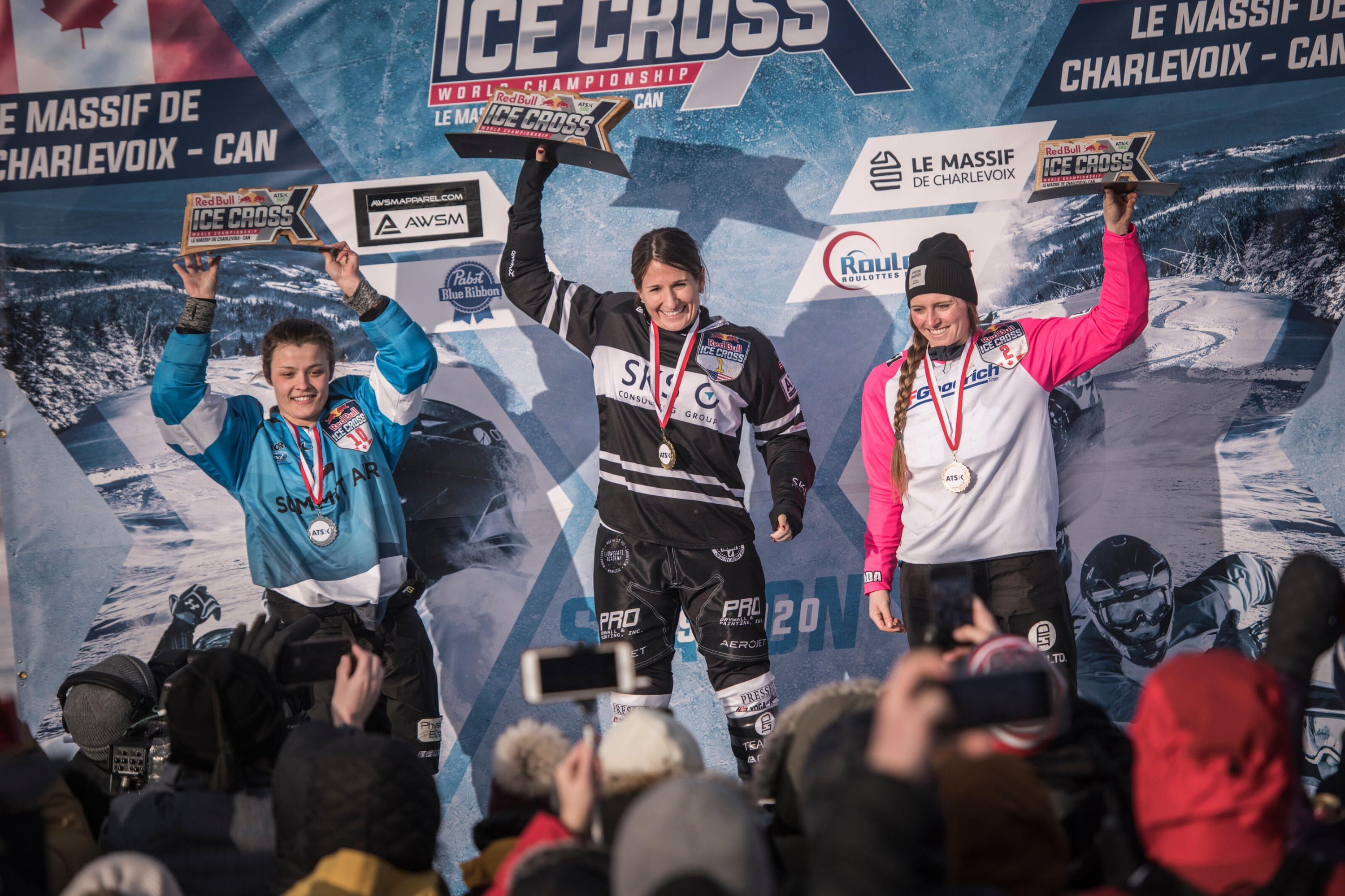 There are three more races scheduled in the Red Bull Ice Cross World Championship this winter, all of them in March: an ATSX 500 in Igora (Russia) on March 7, then an ATSX 250 in Alpe di Siusi (Italy) and the grand finale in Moscow, the second ATSX 1000 of the year on March 21.